Over the summer holidays we were invited to an event at Hamley’s in Regent Street which finished unexpectedly early and left us wondering what to do. I hadn’t been to Covent Garden for years so we made the decision to make the 15 minute walk from where we were to explore.
It seems Covent Garden doesn’t really wake up until gone midday and even the silver “statue” man was still getting ready to perform. We did see a violin playing waiter though.

It had been an early start and the kids were starting to mention that they were hungry so we headed off in search of food. Hubby had mentioned he had heard wonderful things about Five Guys when we passed it early and it was clear he was heading back there as he wanted to try it.

Five Guys originated in Washington DC and were soon voted the burger “#1” in the metro area. Now they are in the UK, serving their hand-formed burgers which are cooked to perfection on a grill along with fresh-cut fries cooked in pure peanut oil and served in a paper bag.

The Five Guys menu is fairly straightforward with variations of burger, hotdogs and a veggies option. Where it differs from other burger restaurants is the amount of toppings you can add – think Subway but for burgers.
It is more expensive than a trip to McDonalds or Burger King, but the food is so much better. The kids had a hot dog each and hubby and I went for burgers with all the trimmings and a cone of chips to share between all of us.

Even the drinks are special. Hubby chose a banana milkshake which was so delicious the kids kept stealing it. Our fizzy drinks we served ourselves from a drinks machine and it was so hard to choose with Cocoa Cola Freestyle, which gives you over 100 flavour choices. Cherry Vanilla coke is a winner for me!

We had arrived at the restaurant before the lunchtime rush, but it soon filled up around us but the atmosphere remained warm and friendly.

The staff couldn’t do enough for us and were chatting with the kids and encouraging them to draw pictures once they had finished the meal which they then proudly got to display on a noticeboard.

The restaurant itself has seating both upstairs and downstairs and was all themed in red and white with large wooden tables and boards on the walls with their ethics which was a lovely touch.

The toilets in fast food restaurants can be a bit hit and miss, but these were clean, tidy and almost space age with the metal doors. My one concern is that they didn’t appear to have a baby changing station, although I didn’t ask as Sebby didn’t need changing at that point.

We left Five Guys with our tummies full and a smile on our faces. It is not somewhere we could afford to eat regularly but is perfect for a special treat! 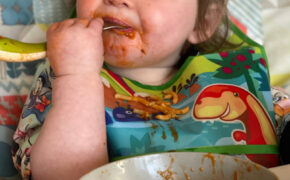 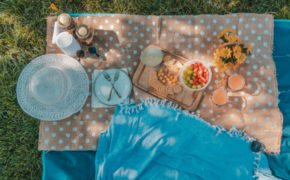 How to create quirky picnic hampers 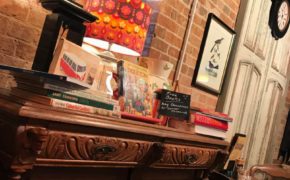