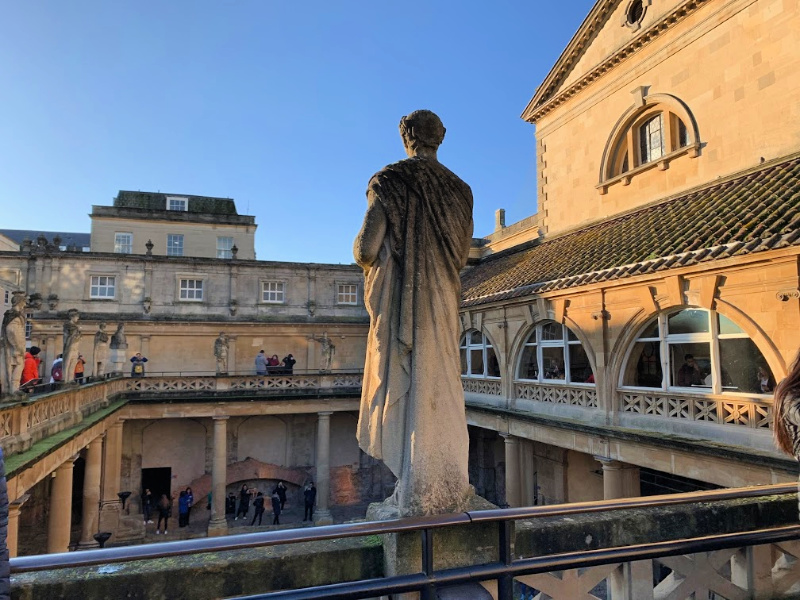 Visiting the Roman Baths with Kids

Our kids love learning about history and are especially fond of the Horrible Histories series of books and TV programmes.

At the end of last year, the film Horrible Histories: The Movie – Rotten Romans came out, all about the Romans and how they came to Britain and the kids have now watched the movie several times.

I was keen to keep up interest in the subject and last weekend we headed to the city of Bath to visit The Roman Baths.

The Roman Baths are Britain’ s only natural thermal spa which is set next to Bath Abbey, in the centre of the city.

There is no parking at the Roman Baths, however, it is so central, that there are half a dozen car parks within easy walking distance and the streets are so picturesque that we could have spent hours looking around.

At the entrance, we picked up our activity trail booklets and free audio guides and headed inside to explore.

You can opt for a guided tour, but we were happy to explore at our own pace, listen to the audioguides, which have both children’s and adult settings and fill in the activity sheets.

The tour starts walking around the outside of the baths, in the shadow of Bath Abbey.

The Roman Baths were constructed in around 70AD as a grand bathing and socialising complex and is one of the best-preserved Roman remains in the world. One of the first things you see in the interactive museum is a huge model of what it would have looked like in its hey day.

Eliza remarked that is looked very much like a modern swimming pool in another model.

It is around this area where the children’s worksheets really start bringing the Baths into reality, asking them to identify sculptures they see, with computer generated imagery and their audio guides filling in the gaps.

As you continue into the museum, it is filled with treasures that have been found on the site, including a huge collection of Roman coins and clever visual snippets that transport you back to Roman times and the lives of the Aquae Sulis people.

Romans would have brought her gifts and sacrifices that would have been made at the great altar.

From this area you then get to see the spring overflow, before heading outside to see the Roman Baths.

The Roman Baths are filled with 1,170,000 litres of steaming spring water, reaching 46°C, every single day and you can see the water steaming as you walk around.

Around the edges are the pool are ancient chambers historically housing changing rooms and tepid plunge pools.

We also found a friendly Celt by the main pool, who chatted with the kids for ages about life around the Roman Baths and let them try on armour and look at things the Roman’s would have used.

Thanks to there fondness for Horrible Histories, they did know what most of the items were for, but it still drew an “ewwww” when they were handed a stick with a sponge on, that had apparently only been used once.

If travelling with young children, beware that the ground underfoot is quite uneven in places, so keep a close eye on them.

The final part of the baths you see is the heated rooms, which include a good surviving hypocaust pilae which show you how their heating system works.

The final challenge of the day is to try the spa water, which contains 43 minerals. The official consensus was “Yuk!”.

From there it is back up to modern street level, where the kids got to get their worksheets checked and were awarded with a certificate and stickers.

A weekday family ticket (two adults and up to four children) to the Roman Baths costs £36.90 online or £41 on the door and includes a free audioguide. Weekend tickets are £44.10 online or £49 on the door.

I would really recommend a visit with children, especially if they are studying Roman history at school.

Have you visited the Roman Baths before?