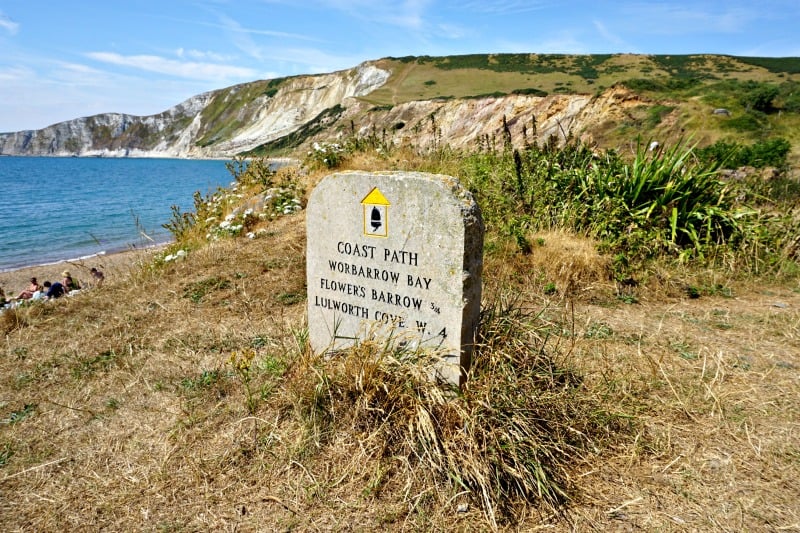 We are very spoilt living in my home county of Dorset, as not only do we have the UNESCO World Heritage site of the Jurassic Coast on our doorstep, but much of the county is classed as an area of outstanding natural beauty.
There are also lots of fascinating places to visit throughout the county and one we have wanted to visit for a while is Tyneham Village, just east of Lulworth and part of the Lulworth ranges which are managed by the MOD.
The fascinating thing about Tyneham village, is that it was evacuated in 1943 during WWII and has been deserted ever since.

The Lulworth Range Walks and Tyneham Village are open to the public every weekend, with the exception of around 6 weekends through the winter months, but it is wise to check the website before you plan your visit. It is also open throughout most school holidays.

Most of the small village is derelict, but inside each of the homes are information plaques about what the buildings were used for and who lived in them, along with historical photographs.

The kids loved racing in and out of buildings, hiding in fireplaces and exploring all the nooks and crannies.

The Church and School are still intact and have exhibitions about the village and villagers and the kids had lots of fun pretending they were at school and looking at things that the village children would have been learning about.

The classroom is set up as it would have been in the early 20th century, with images on the walls, an old piano to try, and even pegs with everyone’s names on.

The Church, St Mary’s, dates from the 13th Century and is now managed by the military.

Although some fixtures and fittings have been moved, it is home to a fascinating exhibition giving information on the history of the Tyneham valley.

The exhibitions in the church and the schoolhouse are open from 10am until 4pm when the village is open to the public.

The village is a lot smaller than I thought it would be and some of the buildings, like the Old Rectory which has now been reduced to a single storey, are cordoned off for safety.

There are plenty of places for the kids to climb and explore though.

Over the other side of the carpark is Tyneham Farm, with the Great Barn, the granary, stables, tack room and cowsheds are all still there. There is a historical farming exhibition in the barn and toilets available if you need a comfort break.

If you visit Tyneham then I highly recommend the walk from the village to Worbarrow Bay.

The walk is approximately a mile long, along a flat but stoney track but is well worth it for the views alone.

There is a small rocky patch to negotiate to get down to the shingle beach, but even on a warm sunny day the beach was relatively quiet.

Worbarrow Bay itself is a large broad and shallow bay just to the east of Lulworth and ideal for swimming and water sports. In fact we saw some scuba divers and kayaks when we were there.

The sea was not only lovely and warm, but brilliantly clear and shallow enough for me to let the kids have a good swim.

Sebby wasn’t quite so keen on having a dip but was content with some stone throwing and paddling.

At the eastern end of the Bay is a huge hill known as Worbarrow Tout which Hubby and Isaac insisted on climbing whilst I stayed on beach hunting for shells and sea glass with the kids.

It is a walk that requires sturdy shoes rather than flip-flops but is well worth it for the views over the Jurassic Coast and over to Portland Bill.

For geology enthusiasts, the cliffs and the tout have distinctive angular layers of rock that visibly demonstrate the complex sedimentary folding that affected this area some 30 million years ago.

Hubby spotted a smaller bay to the east of the tout and once we had finished on the beach, we wandered down for a look around.

This beach was an instant hit with the kids, thanks to its tank traps and large stones – they quickly got to work on a stone stack.

I think Worbarrow Bay has now emerged as our favourite beach spot on the Jurassic coast and we cannot wait to head back with our kayak and snorkels!!