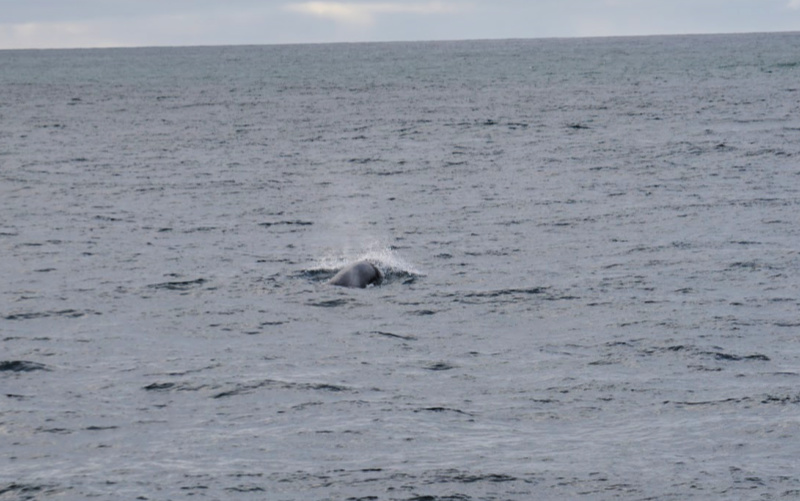 We couldn’t go to Iceland without booking a whale watching trip as it is one of the best locations in the world to spot a variety of whales on the coast.

The peak time for whale watching in Iceland is April to October, so we knew we were at the tail end of the season, and we had spoken to a few couples who had been out and not spotted anything during the week, but we were just as keen to see Iceland from the sea.

We booked a 3 hour trip with Whale Watching Reykjavik, who sail from Reykjavik Old Harbour.

Once we were onboard, the crew gave us a safety briefing and talked through the wildlife that we were hoping to see, with a screen which took us through images and facts about each whale.

The boat was warm and comfortable and provided life jackets for the kids and overalls for us to wear to keep us warm if we wanted them.

I would recommend that you wrap up warm and wear sturdy shoes when whale watching, as it is much colder at sea than it is on land and can get slippery on deck.

The trip takes you out into Faxaflói Bay which has rather shallow, nutrient-rich waters popular among minke whales and our lookout used a clock reference to tell us if and where he spotted a whale.

It took a few moments for our eyes to adjust and spot the Minke whales, but once you know what you are looking for, you can catch glimpses of them as they come to the surface.

Be prepared to move quickly as they do change sides of the boat and if travelling with small children, hold on to them as the boat does move suddenly. Poor Sebby slipped over at one point, so I chose to sit and watch with him, rather than move across the boat.

We were treated to about 20 minutes of watching the whales feeding, plus a couple of dolphin sightings before heading back towards the shore.

I did manage a couple of pictures, but they are at the surface for such a short amount of time that it is really hard to get a decent image.

On the way back to Reykjavik Old Harbour, the kids were happily settled in the warm cabin with a hot chocolate, whilst my husband and I enjoyed the views.

It was definitely a brilliant introduction to whale watching and we plan to head back to Northern Iceland soon, in the hope that we might spot Humpback and Orca’s next time.

Have you been whale watching?