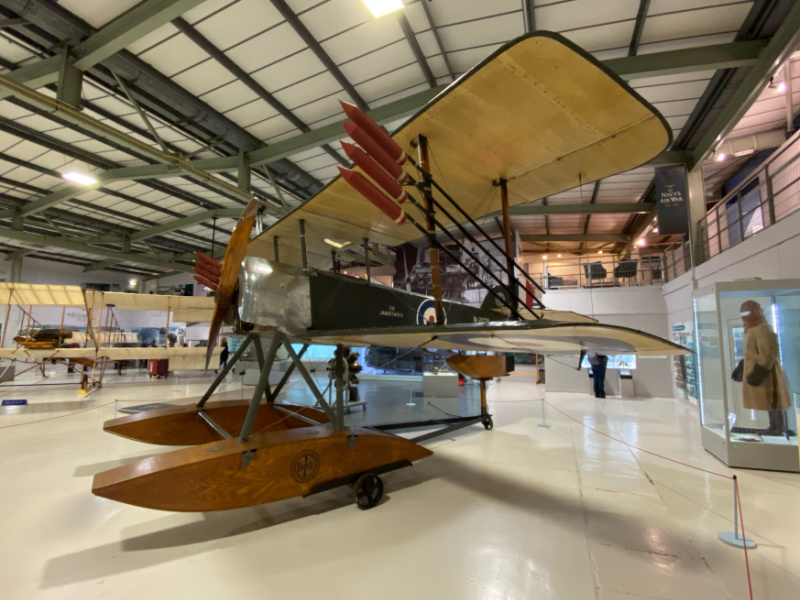 With Kian at university at Bristol, we often drive past Fleet Air Arm Museum and say to ourselves that we must visit.

Today was finally the day that we did!!

Like most visitor attractions, Fleet Air Arm Museum has reduced its capacity, so advance booking is essential. They have also put in a new one-way system and plenty of hand-sanitising stations to ensure the safety of their visitors.

The museum itself consists of four large halls, each of which tells the stories of naval aviation from the first manned kites towed behind naval vessels, to helium filled airships, seaplanes, bi-planes and the carrier borne aircraft of WW2 and modern Sea Harriers and helicopters.

My kids love to get involved with exhibits and there are plenty of interactive elements in each hall to keep them interested in the displays around them, from information screens and videos, to hands-on activities.

Hall One shows the development of naval aviation from early bi-planes to today’s formidable air power from the sea, as well as displays of huge helicopters used in the UK for search and rescue.

Hall Two houses mainly aircraft associated with World War 2 which Isaac is currently studying at school. He loves his history and was especially fascinated by all the information available and pieced together the events with other exhibits we have visited, like the battle of Jutland and HMS Caroline in Belfast, our visits to Portsmouth Historic Dockyard and even Dover Castle for Operation Dynamo.

They had a large area devoted to the Wrens and also real life exhibits of some of the events that had taken place, to really bring it to life.

Hall Three was by far our favourite as it transported you to life onboard an aircraft carrier.

It really did feel like you were aboard a working aircraft carrier and there were big screens at the bow and stern, that would show how an aircraft lands and another is catapulted to take off.

Hall 4 is dedicated to the theory of flight and includes a replica of the first powered plane that the Wright Brothers flew, to some exceptional feats of engineering including the first British built Concorde, and two delta wing test aircraft.

You are able to board Concorde and have a look around. It is surprising how small it is inside and the kids decided all those controls look far too complicated to master.

There is also a viewing area, where you can see planes and helicopters being put through their paces and an adventure play park for the kids to let off some steam.

A Family Ticket to Fleet Air Arm Museum costs £40 online and must be booked in advance. I would allow 2-3 hours for a visit with children and would advise combining it with another local attraction if you plan to make a full day of it.

Disclaimer: We were guests of Fleet Air Arm Museum for the purpose of a review. All thoughts and opinions are our own.