Destination Just for Us UK

My husband isn’t really the romantic type, but every now and then he does something to surprise me.
For my 40th birthday it was a hot air balloon flight but other than the occasional meal out we have not done anything as a couple for quite some time.
Back at the end of January I dropped as many hints as is humanly possible for him to book tickets to see Ed Sheeran as I was working on the release date, but, like many disappointed fans he told me that he just couldn’t get through.
Fast forward a week and he randomly phoned me from work and asked me to check a date on the calendar for him – 28th April, and there it was written in bold, we were going to see Ed Sheeran and he had been playing me all along.
As the date approached, excitement levels grew and grew. We arranged a babysitter for the kids, booked the Jury’s Inn across the road from the Barclaycard Arena and started counting down the days.
We left home fairly early as Birmingham is a three-hour journey and hit quite a bit of traffic heading into Birmingham, so arrived later than planned but managed to check into the hotel and get a spot of dinner at the Handmade Burger Co, which was delicious.

Once we had finished our meal we headed over to the Barclaycard Arena and were surprised about how quickly we managed to get in. Hubby bought me a sweatshirt and himself a t-shirt before heading inside the arena where we caught the last couple of songs from Ryan McMullan. Following him was Anne-Marie, who has the most infectious laugh and entertained us with some of the new songs from her album as well as favourites Alarm, Rock-a-bye and Ciao Adios.

There was a 20 minute interval before Ed Sheeran was due on stage and we watched as the arena gradually filled up. The roar when he came on stage literally lifted the roof.

He opened with Castle on the Hill and positively encouraged everyone to sing along, requesting that should all be hoarse the next day.

I have seen a fair few concerts in my time, most where bands fill the stage and Take That who really put on a show, but this has to be my favourite ever.

The set featured a backdrop of screens, lights and projectors which not only beamed images of him but also amazing computer graphics that matched his songs. It looked a bit like the inside of the Tardis!

The set list included lots of new material from his Divide album as well as some of the old favourites like The A-Team, Don’t and Thinking Out Loud.

In the middle of the set he also performed Feeling Good which was amazing.

The thing that got me the most was his sheer energy. He was bounding around the stage, jumping on and off the blocks but his voice and guitar playing were both faultless throughout.

Like most bands, Ed left the stage after singing ‘Sing’, but returned for an encore and launched into Shape of You and an amazing rendition of ‘You Need Me, I Don’t Need You’.

Once the concert had finished we headed back to the hotel, which was a short five-minute walk from the venue and enjoyed a drink in the bar before heading upstairs.

Both Hubby and I commented that we need to know who supplies the mattresses and pillow for Jury’s Inn, as it is the comfiest hotel bed we have ever slept in, even if we did have to leave early as he had to go to work the next afternoon, so I didn’t get to explore Birmingham.
My only disappointment with the hotel was the breakfast the next day as it was over-cooked and a bit dry, most unusual for the hotel chain and my claim to fame for the day was that we were sat opposite Chico. Thankfully Hubby resisted the urge to ask him for the time!
Have you been to a pop concert before, which has been your favourite? 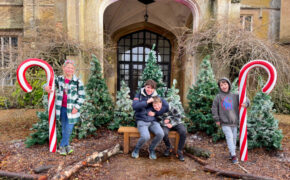