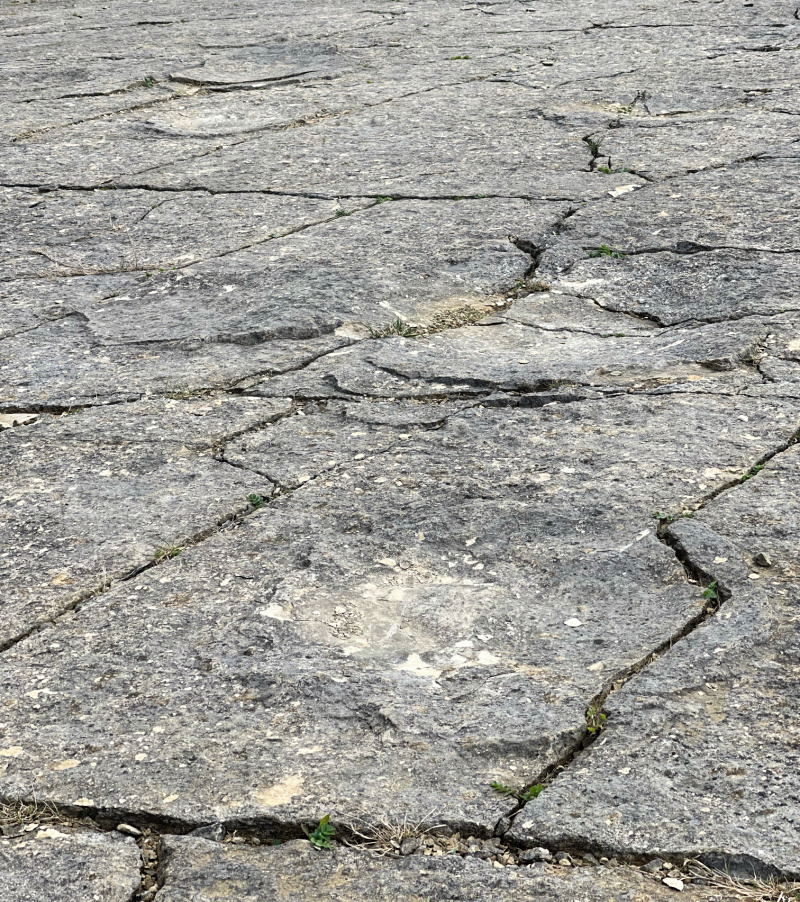 Living on the Jurassic Coast, we are spoiled with some fantastic coastal scenery and the chance to find fossils on some of our walks, but did you know that you can also find dinosaur footprints, in not just one, but two locations?

One set of these are within the BH postcode, in Worth Matravers, near the costal town of Swanage.

The best place to park is the National Trust Spyway carpark, which is free for NT Members or £1 for two hours. (Postcode: BH19 3AA) and features a handy map with directions.

For those with young children, it is a straightforward flat walk, although can be muddy in places, so make sure you bring their wellies.

From Spyway car park, follow the footpath south towards the sea and turn right onto the Priest’s Way, heading west. Continue on the Priest’s Way for about three quarters of a mile, past the quarry’s on either side.

Cross over the crossroads to the quarry’s and go through the gate. After a couple of minutes walk, you will see a gate on the left hand side. It is not clearly signposted from the path, but there is a sign on the gate.

It is then a short walk across a field and through another gate to find the unearthed section of rock with the dinosaur footprints.

More than 140 million years ago, dinosaurs gathered by the shores of a shallow lagoon in what is now Dorset. Incredibly, there are over 100 tracks left behind, although some are more visible than others.

The footprints were probably made by brachiosaurs, a type of dinosaur from the group known as the sauropods, which included the largest land animals that ever lived.

These long necked, plant eating dinosaurs could reach 50 tonnes and measure more than 25 metres from nose to tail and it is thought that the site may have been a watering hole as the prints were left with a number of different individuals, including a juvenile.

From the site of the dinosaur footprints, we then decided to to head down to Seacombe and the south west coast path.

If walking with young children, this is a great place to see farm animals, but it gets quite steep and tricky underfoot, so I would recommend heading back to the carpark and drive to see the fossils at Kimmeridge.

At Seacombe, you can turn left and head towards Dancing Ledge, but we decided to scramble down to the coastal ledge in the hope of spotting some nesting puffins.

We didn’t spot any birds, but it is the perfect location to stop and watch the waves as they crash over the ledges.

As we walked back up towards the path, we spotted the old sea-cliff quarries and have made a promise to head back to explore them another time.

The walk to Dancing Ledge does take you over moderate hills and there are areas where you can scramble down to be closer to the sea.

Dancing Ledge itself is well signposted, with a choice of 4 stiles to clamber over, as it is a very popular area for climbers and coasteerring.

There are steps down to Dancing Ledge and although it was less of a scramble than Seacombe Cliff, I would recommend a sturdy pair of shoes.

Dancing Ledge is a flat area of rock at the base of a small cliff and gets its name because, at certain stages of the tide when the waves wash over the horizontal surface, the surface undulations cause the water to bob about making the ledge appear to dance.

Dancing Ledge is most known for the tide-filled swimming pool that was blasted out of the rock for local school children and is now popular with wild swimmers, although it is not an easy place to climb down to.

Apparently there used to be a ladder, but now there are a choice of two areas to climb down. If you do attempt it, don’t do it when it is wet as the rocks are covered in slippery seaweed and you do have to jump.

Because of its location and the tricky climb back up to the carpark, it doesn’t really get busy, so is a wonderful location to enjoy nature and escape the tourists.

Did I mention the climb back up?

This photo really doesn’t do it justice – it’s a real challenge!

Thankfully once you’re back up the top, it is a flat route back to the carpark.

Have you got a dinosaur lover in the family?