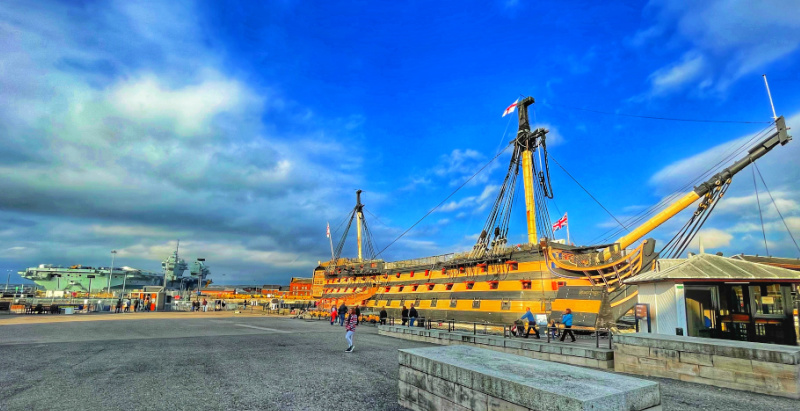 Visiting Portsmouth Historic Dockyard is a family favourite activity for us, as you can spend all day there and still not see everything.

Portsmouth Historic Dockyard is the UK’s premier destination for naval history and takes you on a real journey through time, allowing you to step onboard historic ships and understand the Royal Navy, past, present and future.

We started our day by climbing aboard HMS Warrior, the pride of Queen Victoria’s fleet.

HMS Warrior was the largest and fastest of all Royal Navy ships, back in the nineteenth century. The ship has undergone a re-interpretation, reflecting what she was like in 1863 by opening up new areas of the ship and bringing stories from the period to life, using “Dockyard Alive” actors in costume to really engage people as to what life would have been like on board.

Isaac was “recruited” to work in the boiler room, where he would have to shovel one ton of coal into the furnace every hour, for four hours. He even got to try using some of the tools, which proved challenging as they were really heavy and would have been burning hot too.

The kids really enjoyed the hands-on learning experience and exploring every inch of the ship, from high on top to the very bottom.

Our next stop was HMS M.33, the sole remaining British veteran of the bloody Dardanelles Campaign, which was dwarfed by the enormous HNoMS Maud and HMS Prince of Wales, which were docked behind it.

It might not look the most impressive of the ships, but it is the way they tell the story of the battle, inside the boat, using projectors and sounds. The kids insisted we watch it all from beginning to end before looking at all the other displays inside.

Standing alongside is probably the most famous of ships at Portsmouth Historic Dockyard, HMS Victory.

Best known for her role in the Battle of Trafalgar, the Victory currently has a dual role as the Flagship of the First Sea Lord and as a living museum to the Georgian Navy.

Like HMS Warrior, the Dockyard Alive team were onboard, showing people some of the tools that were used onboard. The kids were especially keen on learning what all the medical tools were used for and how they amputated limbs if the sailors were injured.

The real highlight for our visit was the new HMS Victory Under Hull Walkway, which enables you to descend into the base of the dry dock and view the 3600 tonne ship from below.

Along the walkway are displays on how they are supporting this massive ship with all the struts which is fascinating and a real lesson in physics.

Growing up, I vividly remember the raising of the Mary Rose, one of Henry VIII warships on the TV and subsequently visiting it in the museum with school and again with the kids a few years ago. The museum has morphed and changed since then and is now an interactive experience which really brings the Mary Rose to life.

You start in a room, as if you were onboard the Mary Rose as she sails into battle. It is really fascinating to watch both sides of the screens and you get a real sense of what happened. From there it is into the museum itself, which is full to the brim of artefacts from the ship.

There are plenty of screens around with information and games to keep the kids engaged, whilst we looked at all the exhibits, which ranged from skulls and skeletons to tools, personal effects and weapons.

It is the actual Mary Rose that is fascinating though. It has changed position since our last visit and now sits upright as it would have looked, with the museum and floors lined the opposite side as a mirror image, with artefacts lined up as they would have been stored.

I really struggled to visualise it on previous visits, but this made it all come to life, alongside projections on some of the floors.

We had hoped to take a boat tour of the harbour to see some of the navy boats that were in port and visit the Submarine Museum over the water, but sadly we ran out of time.

We finished our day in the Royal Navy Museum which showcases treasures from the past 350 years and examines the common threads which link the sailor of England’s ‘Wooden Walls’ to the professional crews of today.

The Dockyard Alive team really made our visit extra special and really kept the kids engaged and entertained, alongside all the information screens which are dotted around.

We even learned some Morse Code.

I would recommend choosing the Ultimate Explorer Ticket, which allows you access to all the attractions and is valid for 12 months and is £39 for adults and £29 for children.

Disclaimer: We were invited to Portsmouth Historic Dockyard for the purpose of a review. All thoughts and opinions are our own