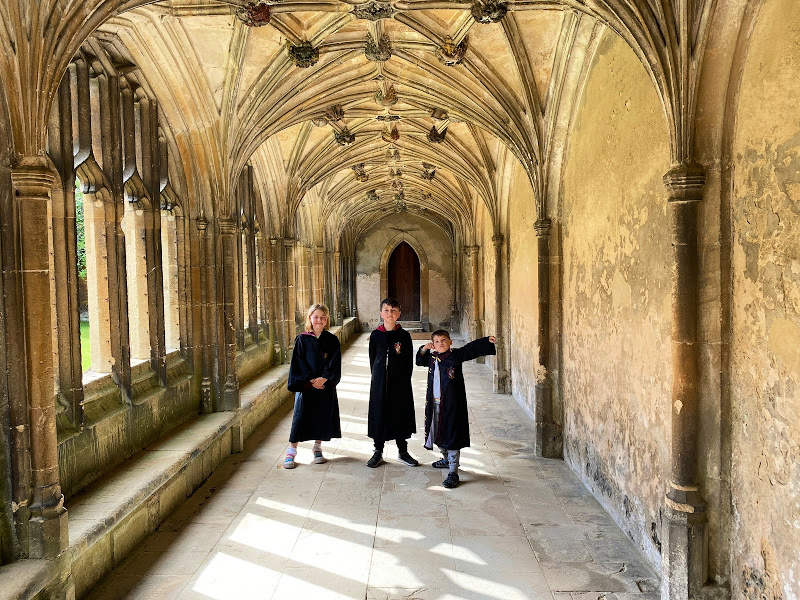 Harry Potter is a huge deal in our house and now that we are able to travel a little farther afield, I was keen to take the kids to see some of the filming locations.

Lacock Abbey is set in Wiltshire and is famously the birthplace of photography in the UK.

Like other National Trust properties, you need to book your timed slot via eventbrite, which is free of charge for members.

That fact did not interest the kids, they were more excited to learn that the interior of the Abbey was used as the the hallways and classrooms of Hogwarts School for a significant number of scenes in the first two Harry Potter films.

More recently, it has also been used in the Fantastic Beasts film: The Crimes of Grindelwald.

Thankfully, I remembered their Hogwarts cloaks, although I think Isaac would have suited Slytherin more!!

Don’t worry if you are not Potter fans, it has also been used in period drama’s such as Wolf Hall and Downton Abbey.

Lacock Abbey and its grounds are stunning and the perfect place to let the kids run off steam.

Once you have finished exploring the Abbey and its grounds, the village of Lacock is just a short stroll away.

With quaint traditional stone cottages, the old workhouse, the medieval tithe barn, the old lock-up and the village church there is a lot to admire, much of which has also been used in films and TV programs.

The only disappointing aspect is that cars are parked everywhere, so you don’t get to fully appreciate the look of the village, some of which dates back over 200 years ago.

It is worth noting, that some of the enterprising residents have set up stalls outside their houses selling Harry Potter memorabilia or arts and crafts, so make sure you take some cash with you.

There is also the Fox Talbot Museum to visit, however it was not open whilst we were there. The museum explores the history of photography, housing a collection spanning photographic developments up to the present day.

The COVID restrictions felt quite relaxed around the site as much of it is outside. Children over 11 and adults are expected to wear masks when in an indoor area.

The Abbey was relatively quiet on our visit, but the village, which is open to the public was a lot busier.

Lacock is a lovely day out with country walks and we would love to go back for a re-visit soon – have you visited before?