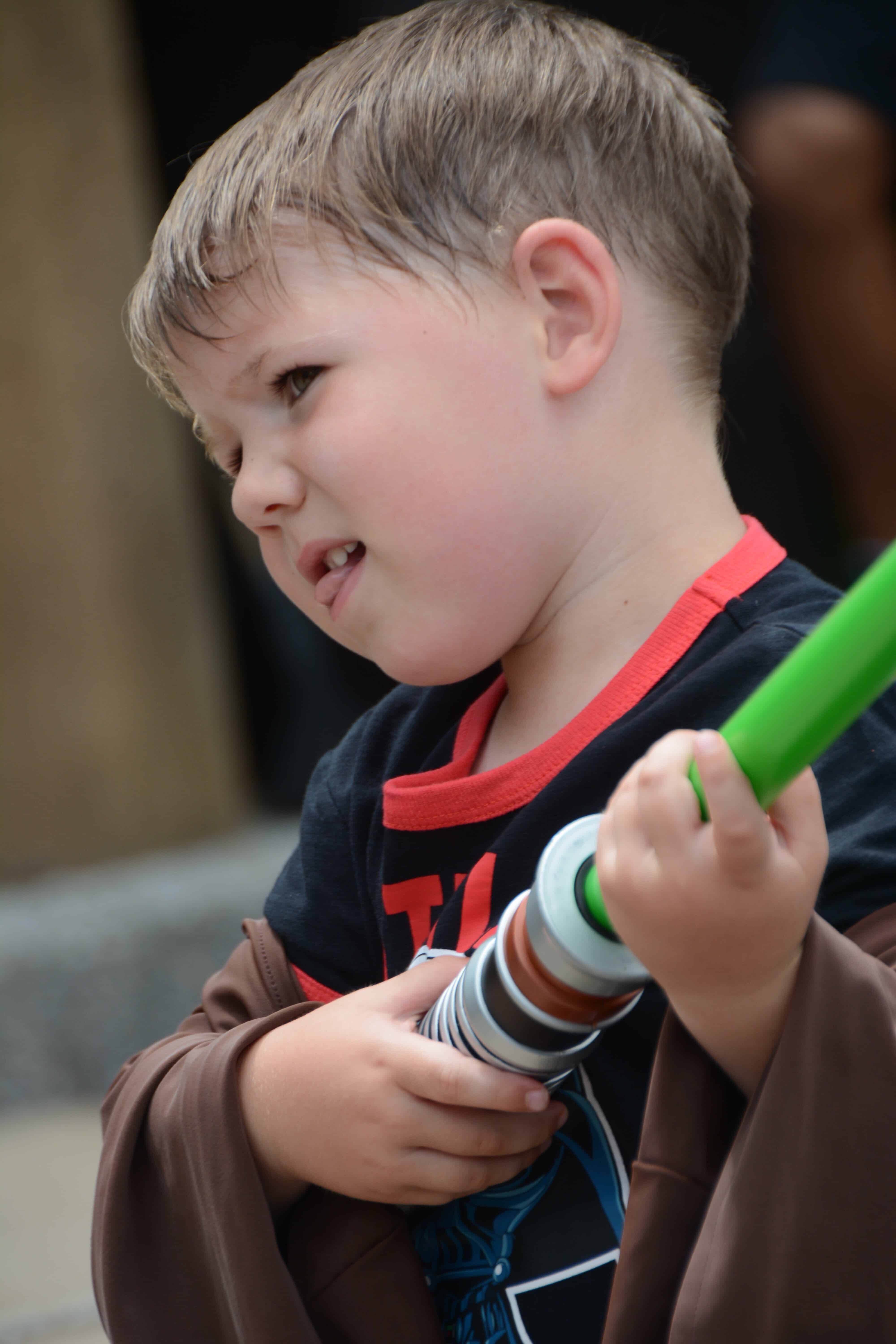 Star Wars is a big thing at Hollywood Studios at Walt Disney World.
You can embark on Star Wars adventures with the 3D motion-simulated Star Tours ride; visit Star Wars locations; meet Star Wars characters, including Kylo Ren, BB8 and Chewbacca; view Star Wars movie props and shop for Star Wars merchandise in several locations around the park.
Hubby has been Star Wars mad since he was a child and has passed on his love of the movies to all the kids, so one of our must do activities at Disney was to sign up to the Jedi Training Academy: Trials of the Temple.

The training academy is free to do and open to all children aged 4-12 and can only be booked on the day by visiting the sign up area at the Indiana Jones outpost. I strongly advise that this is the first thing you do when you enter the park as it fills up very quickly.

Once you have your time you are advised to arrive 20 minutes before your allotted time to get kitted up in a robe and be assigned to one of two teams of 15 children. Each team is assigned a Photopass photographer for the session to capture all the action.  If you have Memory Maker or are interested in the photos, make sure to pick up the correct PhotoPass card for your child’s group to ensure you get access to the photos.

Whilst you are waiting the Disney team ask questions and play games with the kids which resulted in Hubby doing his best Chewbacca impression. We then had to match through the crowds chanting “Her come the Jedi” “Here We Come!”, to the special stage area next to the Stars Tours ride.

With the stage being outdoors the show relies on the weather being dry and sadly our first attempt was rained off so we got to meet Darth Vader instead. Luckily, our second attempt was more successful.

The show consists of a Jedi Master and several assistants leading 30 participants through basic Jedi training and the first thing they do is introduce themselves to the young padawans before giving them a brief demonstration of their skills.

One team use the raised area of the stage and the other team are on a lower level with marked spots for each child to stand upon, which gives them plenty of room to wield a lightsaber.

Once everyone is in place, lightsabers are handed out and they are taught basic lightsaber moves and tactics as a group.

With the moves fresh in their heads, the kids and their Jedi trainers use ‘the force’ to open the Jedi Temple doors at the back of the raised stage and face their fears and do battle with the Sith.

The kids were then taken up one by one to duel with the characters, supported by one of the Jedi trainers who reminded them which moves to use.

Of course the younglings and Jedi trainers are successful in overcoming their fears!

They defeat Darth Vader and the Seventh Sister and drive them back into the Temple.

However, the show is not over and one of the young Jedi trainers has a fear that must be faced……. Kylo Ren!

At first it appears as though her fear is taking over and Kylo Ren has the upper hand…..

…..but with encouragement from the Jedi Master she gains confidence……

…..and with assistance from the young padawans using the force, the Jedi trainer finally drives Kylo Ren away.

With order restored and training completed, the young padawans are presented to the audience and are each given a badge to commemorate their experience.

After the show Sebby wanted his own lightsaber and we found Tatooine Traders at the exit to Star Tours the best place to get one as they had a cheaper Mickey Mouse light up option, or you could design and create your very own. You can guess which one he chose!

All three kids loved their Jedi training experience, Hubby is now wishing they will introduce an adult version!!

Disclaimer:  This post is in partnership with Walt Disney World and Mumsnet. I am a member of the Mumsnet Bloggers Panel, a group of parent bloggers who have volunteered to review products, services, events and brands for Mumsnet. I have not paid for the product or to attend an event. I have editorial control and retain full editorial integrity and all opinions here are my own.