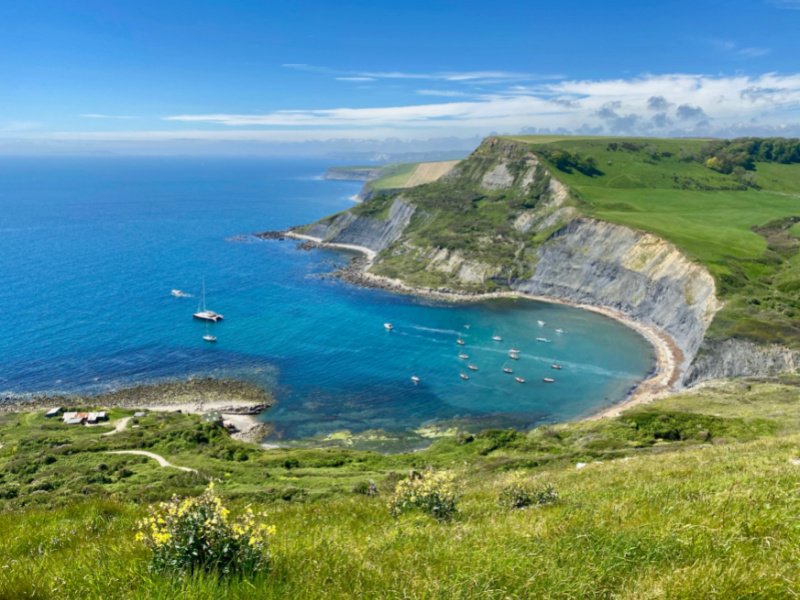 Chapman’s Pool is a stunning cove, set just beyond St Aldhelm’s Head on the Jurassic coast near Swanage.

The nearest place to park is Renscombe car park in Worth Matravers (BH19 3LL), although it is fairly small and is often full by mid-morning, especially in the spring / summer months.

We were unable to park here, so opted to park in the village carpark in Worth Matravers, which adds another 15 minutes onto the walk, along the road, or further if you decide to take the coastal route.

The initial part of the walk is fairly straight forward and looking down over the cove is beautiful.

The horseshoe-shaped cove of Chapman’s Pool was formed in the same way as that of the better-known Lulworth Cove along the coast, but is not as popular with tourists as it is much harder to get to.

From this position the walk down can be fairly challenging in places, so young children and some dogs might struggle.

The path down is a mixture of steps and track, although there is a longer, more gentle route that takes you through the valley.

There are a couple of paths that head off in different directions, but when you reach the gate at the bottom, you need to turn left to get down to the beach.

Down in the cove are a couple of fisherman’s huts and a slipway and Eliza was quick to point out that she had found some fossils almost immediately.

The slipway is sometimes still used by fishermen, but on the day we visited a family was using it for some swimming practice.

The beach is a mix of rock and shingle, which can be a bit of a challenge to get over. There is a smoother area next to the cliff, but to be aware of the dangers of being near a cliff edge, as there have been some significant rock falls along the Jurassic Coast this year.

Chapman’s Pool is a good place to see examples of the Kimmeridge Clay rock formation of neighbouring Kimmeridge Bay, where the clay with its abundant fossils is most famously displayed and we found some huge specimens, especially on the western side of the bay.

After a spot of fossil hunting, the kids were itching for a swim.

We decided to take a different route up from the beach, which is more of a scramble.

In fact at one point, we were pulling ourselves up the hill with a rope – thank goodness I was wearing walking boots!!

I am not going to lie, the walk back up the steps was exhausting and both Eliza, Sebby and I did need a few breaks. Thankfully the pathway back to the carpark was flat and much easier.

Have you visited Chapman’s Pool before?