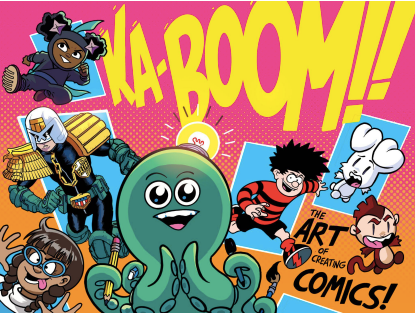 The Story Museum in Oxford will inspire children to become the next generation of comic creators with their exhibition KA-BOOM! The Art of Creating Comics. Presented in partnership with three iconic British publishers – The Phoenix, Rebellion and Beano – the exhibition will bring together characters from across different comic worlds for the very first time.

KA-BOOM! takes visitors on an interactive journey through the comic-making process in order to encourage the next generation of comic artists and writers. A giant pop-up comic strip created in conjunction with comic artist and long-standing contributor to The Phoenix, Neill Cameron will take over the museum’s temporary exhibition space, revealing what makes a great comic and giving children the skills to make their own.

Visitors will be guided through the comic process – from developing characters and plotting, to drawing, colouring and lettering – with the help of some familiar faces including Dennis and Gnasher, Minnie the Minx, Cadet Judge Dredd and Bunny VS Monkey, and tips from experts including Ramzee, Laura Howell and Jamie Smart. Also on display throughout the exhibition will be original artwork showcasing the rich history of British comic book making, including artist sketches from the 1950s to the present day.

Like the very best comics, the exhibition will be overseen by its newly appointed Editor-in-Chief, Octoboom the octopus. Created by 9-year-old Eddie Tilling at The Story Museum’s monthly Comic Club in collaboration with Neill Cameron, Octoboom will lead visitors through the process of creating a comic.

KA-BOOM! speaks to The Story Museum’s wider mission to represent stories in all forms and make reading an accessible, enjoyable experience for children of all ages and abilities. Comics are a proven medium that supports the development of literacy and offers a different route into discovering the pleasure of reading.

Caroline Jones, Director of The Story Museum, comments, “Comics are one of the many story forms we collect and celebrate at the Story Museum. The exhibition will lift the curtain on the comic making process, from creating complex narratives to developing eye-catching artwork. The comics on display will showcase the skill behind their apparent simplicity.“ Comic artist Neill Cameron, said: ‘’It’s incredibly exciting to be bringing all these iconic characters together for one shared cause: to shout about the awesome power of comics to ignite kids’ imaginations and inspire their creativity. I’m literally getting to draw the most amazing comics team-up of all time and I can’t wait for visitors to get to come and
experience it for themselves.’’

KA-BOOM! opens alongside the sold-out Phoenix Comic Festival, which is taking place at The Story Museum from 28 – 29 May. The festival, which will celebrate The Phoenix’s 10th birthday, includes masterclasses and interactive workshops with some of the comic’s best-loved contributors. The public can still get involved online by joining a draw-along with Bunny Vs Monkey creator Jamie Smart.