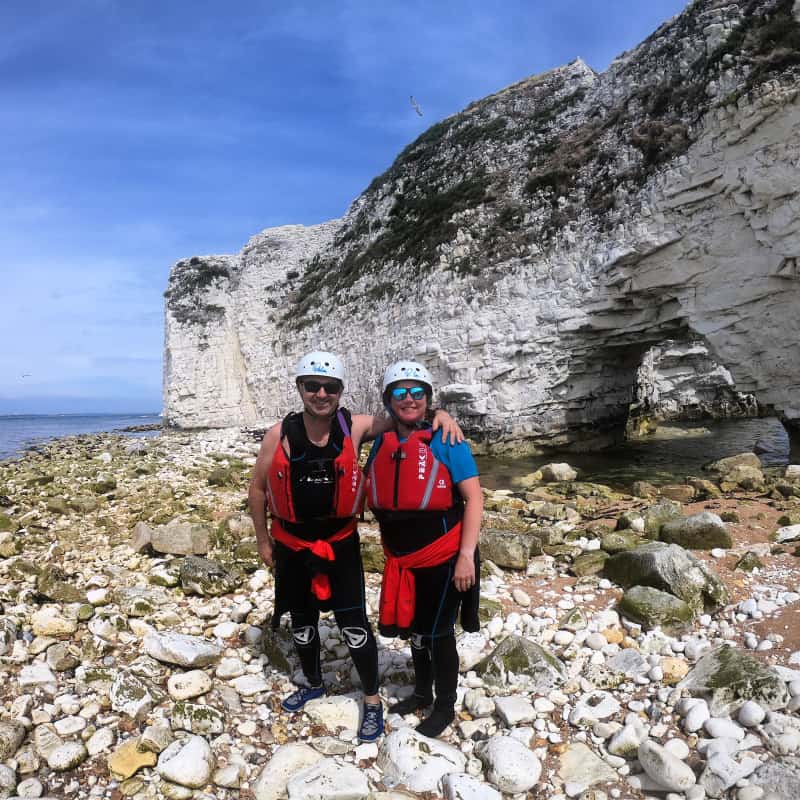 Kayaking out to Old Harry Rocks on the Jurassic Coast

My husband has kayaked out to Old Harry Rocks with Kian a few times now, but I have always been left in charge of the small people.

Last week was our 14th wedding anniversary and when he asked what I wanted to do, it was top of my wish list.

We booked a half day Old Harry Rocks Tour with Fore Adventure, who are based in Middle Beach car park in Studland Bay.

The tour starts on the beach, with an introduction to the tandem kayaks and how to use them safely by our guide for the day, Josh.

The bay is shallow and sheltered, so the perfect location to learn how to kayak.

We hugged the coastline as we kayaked out to Old Harry Rocks, with Josh pointing out interesting things to see both under and above the water, with plenty of nesting birds and their chicks to see.

The water was calm and clear until we rounded the huge chalk stacks, where on the sea facing side of the coastline, we headed towards Swanage, which was a bit harder going as we faced more choppy seas.

We paddled up as far as Parson’s nose chalk stack and ate at sample of fresh seaweed before turning around and to head back towards Old Harry Rocks, where we got to get out of our kayaks and explore.

It is quite slippery underfoot, but looking at the chalk arches and stacks up close, is fascinating.

Josh pointed out fault lines which contain flint and gives the rocks a pinkish tinge in places.

Josh told us all about the history of the rocks, including how they were named – apparently after the devil, although many think it’s after the infamous Poole pirate, Harry Paye.

The half day kayak tour takes around 3 hours and sees you kayak for around 4.5 miles in total.

Fore Adventure provide a wet suit, floatation aid, helmet, jacket, the kayak and a tour guide. I highly recommend that you wear sturdy wet shoes, so you can confidently navigate the area around Old Harry Rocks.

A half day Old Harry Rock Tour from Fore Adventure costs £50 per person and is suitable for adults and children aged 12+.

For those with younger adventurers, they also run a 2 hour tour for £35 per person which is suitable for those aged 8+ – find out more at www.foreadventure.co.uk