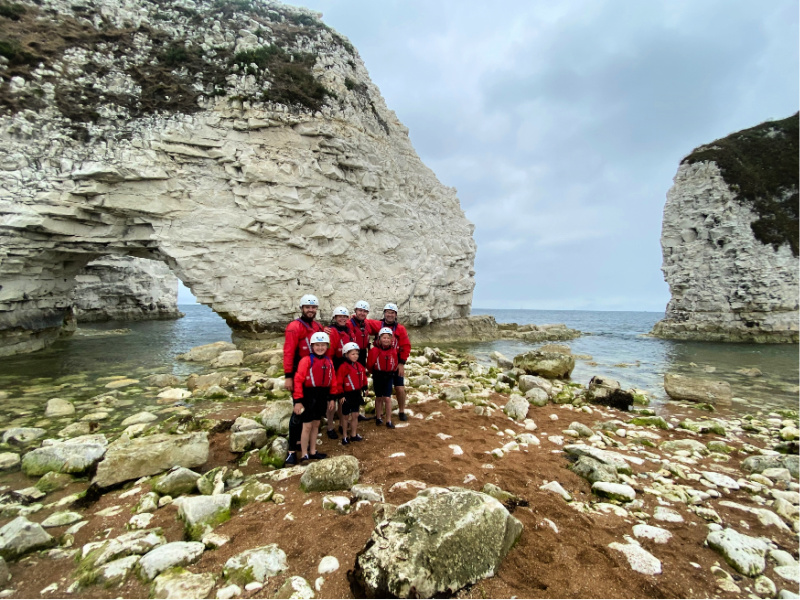 Kayaking out to Old Harry Rocks from Middle Beach in Studland has become a bit of a family tradition, but until now the kids were too young to join us.

This year for my husband’s birthday, after so long in lockdown, I booked a 2 hour family kayak trip to Old Harry Rocks with Fore / Adventure. The suggested minimum age is 8, but as we were a group with 4 adults going out, they kindly agreed that Sebby (7) could come along.

Sadly the glorious sunshine that had initially been promised, did not materialise, but that did not spoil our enjoyment of the day.

It is pretty easy to social distance on the water, but Fore / Adventure has taken the appropriate steps to ensure that everyone is kept apart. We were expected to use hand sanitiser before we got kitted up and all the equipment is cleaned in between uses. We were all also kept in our separate “bubbles”.

There is a new one-way system down to the beach from the carpark, so we headed from the hut and down the access road to the beach, via the cafe to find our kayaks.

Kyle was our instructor and he gave us a training session on the beach before we started. Kian was paired with Sebby, Callan with Isaac and my husband with Eliza, meaning I went out in a solo kayak.

On previous kayak trips to Old Harry Rocks, the sea has been like a mill pond, but today the tide was on its way out and there was a bit of chop. The kids were off and gone, but I was struggling to keep my kayak in a straight line, so Kyle popped a guide rope on the nose of my kayak to stop me heading off course.

I did get some light ribbing from the kids about “getting a tow”, but it really helped and thankfully once we were alongside the cliffs, Kyle unhooked me as I had got into my stride.

All the kids did a brilliant job of paddling, with Callan and Isaac and Kian and Sebby enjoying some mini races.

Kyle did a good job of keeping their competitiveness at bay and really involved the kids chatting about the area, pointing out nesting birds, rock formations and telling exciting tales of pirates. Both Eliza and Isaac have done some project work on Old Harry Rocks at school, so seeing it up close really helped them understand their research.

There is a small tidal beach at Old Harry Rocks itself and we were allowed to get out of our kayaks and explore. You could really see the tide rushing out at this point and Kyle showed us how we could cross a tidal river safely, if we ever needed too.

We then watched as another group of unaccompanied kayakers got caught in the pull and were dragged around the corner, showing how dangerous it could be if you don’t know what you are doing. Thankfully they were ok and managed to get back.

We were then allowed to explore for a few minutes and the older two were horsing around doing their instagram poses.

If heading out, I strongly recommend wearing wet shoes or trainers with a good grip as it is very slippery underfoot.

Kyle very kindly took a photo of us all whilst we were there.

It was then time to jump back in the kayak’s to head back, with a slight personnel change. Kian took Isaac this time and Callan took Sebby.

Thankfully the weather started to clear for the journey back to Middle Beach.

Fore / Adventure also offer a longer, four hour kayak trip which takes you around Old Harry Rocks and further along the coast to Swanage.

They provide a wet suit, floatation aid, helmet, jacket, the kayak and a tour guide. I also recommend that you wear sturdy wet shoes and buy a waterproof phone pouch or dry bag, so you can get those all important photo’s.

Just be aware that when kayaking with small people, they do have a habit of taking frequent breaks!

Once back on dry land, it was time to warm up with chips and a hot chocolate at the cafe on the beach!

Have you been sea kayaking before?