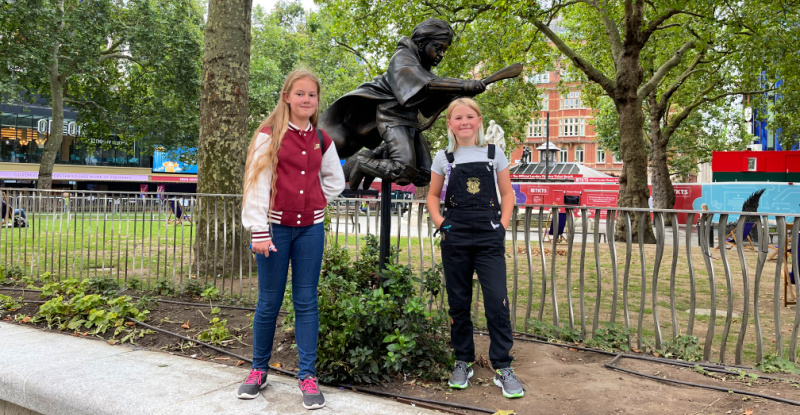 Magical Places Harry Potter fans have to visit in London

If you have a tween in the house, chances are they have already devoured at least one of the Harry Potter series of books and watched the films.

Oh, who am I kidding?

The adults in our household love it just as much as the kids.

Located in Covent Garden, the Harry Potter Photographic Exhibition houses iconic photographs from behind-the-scenes of key moments in the film series, from Harry’s first day at Hogwarts through to the Battle of Hogwarts.

Each photograph is displayed alongside information with the actors details, which scene and film it featured and its location. We now have an even longer list of Harry Potter locations to visit.

Alongside the photographs, there are genuine props from the movies, including books, signs, potion ingredients and even gold from Gringotts Bank.

There are plenty of knowledgable staff on hand to help with any questions throughout the visit.

The exhibition ends with green screen photo opportunities aboard a broomstick, or in the Ministry of Magic.

There is also a red telephone box set amongst the vibrant green tiles of the Ministry of Magic, that you can climb in and exit again.

The tour is also home to London’s only bottled Butterbeer bar and you can sit in a butterbeer barrel and enjoy a tipple with friends.

Just a short stroll away from Covent Garden is Cecil Court, the inspiration for Diagon Alley.

They must first dial a secret code into a telephone keypad 62442. The letters underneath those numbers on a standard mobile phone spell out the word “magic.”

Muggle Prime Minister’s Office and location of communication between the Muggle PM and the wizarding world.

We were lucky enough to visit Downing Street when we toured the Houses of Parliament, which can be arranged through your local MP.

Thankfully it was rebuilt after the attack by the Death Eaters!

The Geometric Staircase inside the cathedral features in the Prisoner of Azkaban.

Not featured in the films as such, although home to film premiers. It features statues of film favourites and one of them is Harry flying his broomstick.

Some of the most iconic broomstick flights took part over the River Thames and although you cannot replicate these, you can still see it from above on the London Eye.

Or sail down the river aboard an MBNA clipper and then take the Emirates airline over the river.

Warner Bros Harry Potter Studio Tour is based in Watford and takes around 40 minutes from London.

The Warner Bros Studio tour is a must for fans on the film franchise as you get to see actual sets, costumes, creatures and props from all of the Harry Potter films.

There is plenty to do for the kids, with green screen photo opportunities, the chance to pose by their favourite sets, commanding their own broomstick and even wand training.

It is well worth a visit, but beware, the extra’s are quite pricey and you exit through the huge shop, full to bursting with all things Harry – something is bound to come home with you!

Have you visited any of these Harry Potter locations?