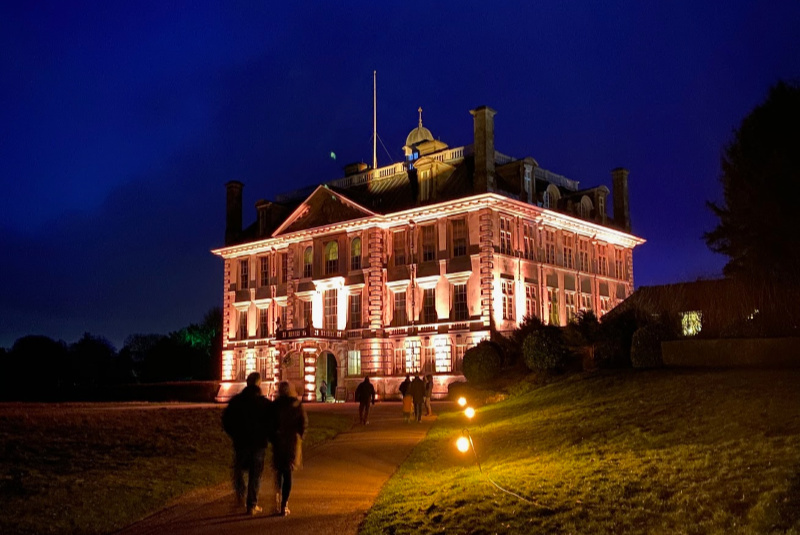 Our visit to see the Christmas Lights at Kingston Lacy

One of our favourite activities over the Christmas period is seeing all the festive lights that people put up and this year, for the first time, Kingston Lacy lit up their beautiful formal garden.

Unlike many light displays, the Kingston Lacy ones were included in the price of our National Trust membership so we didn’t have to pay extra to get in to see them.

The light trail started in the courtyard between the shop and the main Kingston Lacy House and had a well marked and supervised trail to follow.

Our first port of call was the path to the main house, where we found a fire display which lead to a wicker Santa’s Sleigh and the house all lit up.

We then followed the trail around to the side of the house into the rear formal gardens.

There was a real “WOW” moment as we saw the path to the nine-metre tall Philae obelisk all lit up. The kids likened it to a laser quest and were busy creeping round and leaping over the beams of light, much to the amusement of other visitors.

It was really hard to get a photo that really did it justice as there were spotlights beaming onto the house.

From here we walked to the illuminated wooded area.

One of the first things we spotted was lots of tiny, LED lights that were sparkling off the trees, making them look like they were filled with lots of glittering fairies fluttering between the branches.

The path then wound through the flower beds, where the kids were keen to spot any fairy doors that were hidden amongst the plants.

It was Lime Avenue that drew the most gasps of wonder, as the trees transformed into a huge path of all the changing colours of the rainbow.

Because of all the rain we have recently, some paths were blocked off, but that did not detract from the experience.

In the Acer Glade we found a display of gorgeous Chinese Lanterns, before we turned and headed back towards the main house.

Back along the main pathway, there is an area where the kids can control some of the lights and create a flashing display of their own.

Kingston Lacy is open from 10am until 7pm with the light displays on from 4pm until 5th January.

The cafe / restaurant is also open, plus there is an additional kiosk selling hot drinks if you require refreshments.

A family ticket to Kingston Lacy costs from £43, however it is well worth buying an annual NT membership for £126 (also payable monthly) which gets you into all NT properties and locations for a whole year.