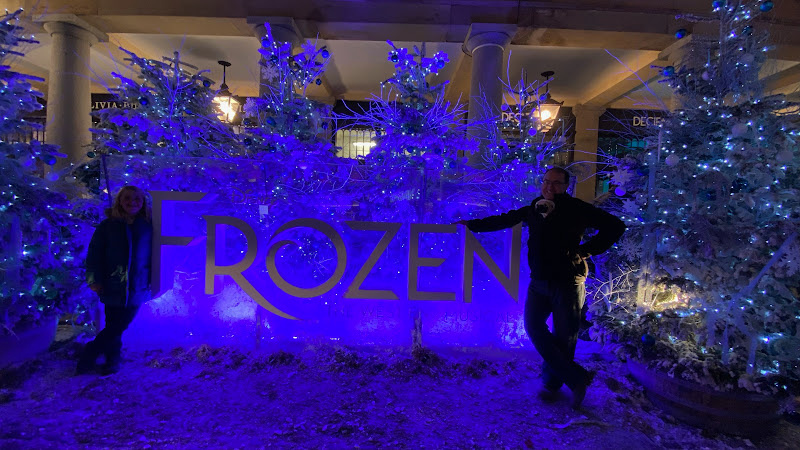 Disney’s Frozen was released all the way back in December 2013 and it was the first film we ever took Eliza to see at the cinema.

Fast forward almost 8 years and we booked Eliza to see Frozen the Musical for her birthday back in January, but thanks to the lockdown it was postponed twice. Thankfully it was a case of third time lucky and we finally saw the show on Sunday and it was well worth the wait.

Frozen the Musical is set in the Theatre Royal Drury Lane, London, just off Covent Garden, which has itself been transformed into its very own version of Arrendelle, complete with its own personal flurry, every hour between 12noon and 7pm.

You can stop and immerse yourself in the Frozen Forest on the North Piazza and pose for a photo before, or after seeing the show.

There is also the Insta-famous Infinity Chamber had an icy overhaul in true Elsa style to appear frozen, with an additional 3D neon installation at both the Long Acre and Floral Street entrances.

It is really cleverly done with lit lyrics above the entrance / exit and the song written on the floor.

Once we had finished exploring Covent Garden and all its amazing decorations, we headed to the theatre to take our seats. At the age of almost 11, Eliza has outgrown dressing up, but she did wear her Disney Elsa ears for the occasion.

The show every bit as magical as the animation, but don’t expect a re-run of the film on stage. The story has been adapted for the stage and although all songs from the original are in the show, some of the words have been altered and there are some brilliant new additions in there too.

We were all transfixed from right from the start and were mesmerised by the gorgeous choreography and incredible set changes that took you from the palace, to the sea, the mountains and then the ice palace and back again.

The biggest cheers were reserved for the introduction of Sven and Olaf and the biggest laughs came with the entrance of the Duke of Weselton and his rather dodgy dance moves.

The ice palace was stunning, with a mixture of crystals hanging from the walls and lights creating the magic. Elsa’s costume transformation was just incredible and I still cannot work out how they did it so effectively.

In the interval, Eliza remarked that they had missed Wandering Oaken’s Trading Post and Sauna, but that is where they opened the second half of the show, with a brilliant new song, Hygge, which is accompanied by naked characters doing the conga out of a sauna. It definitely added a sense of fun to the show and we cannot stop singing it, even now.

The whole cast was incredible and the story of Anna and Elsa’s relationship actually came across better than in the film. Anna was still the goofy, ball of energy we all know and love, whilst Elsa was much more melancholic as she came to terms with her powers throughout the show.

Each half of the show lasted for an hour, with a 20 minute break which felt just right, although we did notice that some younger audience members did struggle.

After the show, the merchandise shop does get very busy and is quite pricey. Most of the clothing cost between £30 and £40, whilst the cuddly toy characters were also £40. There were some smaller items such as keyring’s and cups that were cheaper.