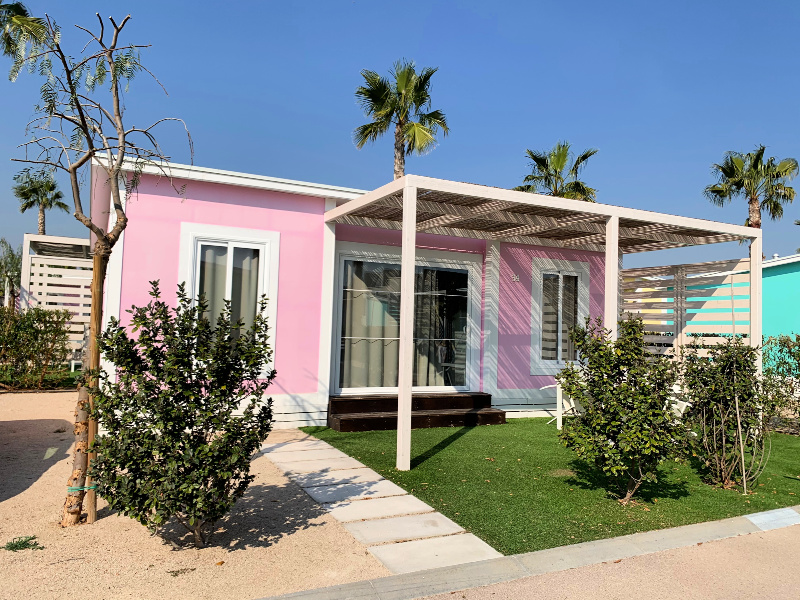 For the last couple of years we have spent February half term in the UK, but this year we decided to head to Spain to find some much needed sunshine after all the dreary weather we have been having.

After much research we decided to fly to Alicante and stay at the Alannia Costa Blanca resort, reportedly one of the best equipped camping resorts in Europe, which is around a 40 minute drive from the airport.

Our home for the week was a Habana Bungalow, which features a terrace, double bedroom, a second bedroom with three single beds, bathroom, kitchen area, a lounge diner and a parking space.

The Habana bungalows are all painted pretty pastel shades, which look really pretty lined up along the road.

The kids adored their bedroom layout, which had two single beds along each wall and then a third bunk style bed on the back wall of the room.

The bungalow also comes with a good WiFi signal, TV and air conditioning which can be programmed for warm air, perfect for chilly nights in February.

We did have a major issue with the bungalow, however. On the website it states that the bungalow has a fully equipped kitchen and whilst it had a fridge freezer and a dishwasher, it had no oven, no kettle and no toaster.

In fact cooking facilities were a two ring hob and a basic microwave which is really not suitable for a family of five planning on self catering the holiday to save money.

The resort itself was spotlessly clean and there is a small supermarket, small restaurant, spa, gym and medical centre on site in the main plaza area.

The kids were most looking forward to trying the pools, particularly the animal themed one with slides, but despite the website giving the impression it was open all year round, it was closed.

Luckily the Tahiti Beach swimming pool was open, so they did get to enjoy a dip in a pool.

The resort itself seemed busy, however, the kids club was only open at the end of the week and there was no evening entertainment on, despite the website stating it was on all year round, so the kids had to make their own entertainment.

There is the option of renting bikes should you wish, but we made the decision to make the most of our car hire and explore the local area.

All-in-all, the campsite is very pretty but it is situated right next to the AP-7 Dual carriageway so there is a constant hum of traffic, which could be a problem if you are sensitive to noise. However, it does make it a good base to stay and explore the local area and we enjoyed day trips to Elche, Cartagena, Valencia and Alicante during our stay.

Sadly, we were really disappointed with our stay and would not recommend it, particularly out of summer season.