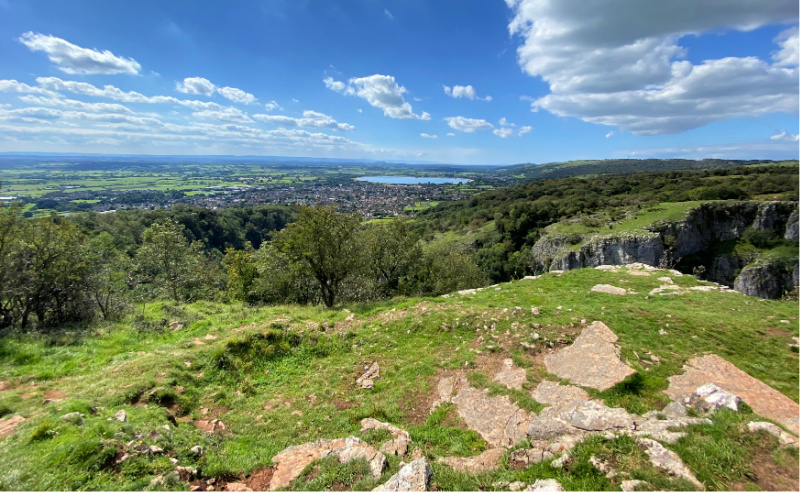 I wrote my 50 places before 50 post back in 2018, with no notion that I travel plans would be restricted for the forseeable future.

Cheddar Gorge is on that list and during the half term break, we made the two hour journey to Somerset to explore.

Sadly, due to COVID19, the caves are currently closed, which is disappointing, but it is still worth visiting.

As we drove into the gorge, we saw where the locals park to walk the gorge, but we decided to make the climb from Jacob’s Ladder. As we headed through, the road winds through the gorge with spectacular views of the gorge overhead, although this is marred somewhat by the carparks and the sheer amount of cars.

Despite being a National Trust site, membership doesn’t cover the cost of entry or parking, so bear in mind that it costs £5 to park in one of these carparks for up to 24 hours. It is also worth noting that there are no official pathways until you actually reach the village of Cheddar, so make sure you keep an eye on younger children.

The entrance to Jacob’s Ladder is through the tickets and information centre and costs £5.50 per adult and £4.00 per child. The lookout platform is currently closed, so the tickets also includes entry to the museum too.

Jacob’s Ladder is not for the faint hearted, there are 274 steps to the top. The kids raced to the top, but I took full advantage of the 4 strategically placed breaks in the steps for a breather.

There were plenty of information boards dotted along the pathway with information about the flora and fauna and to keep the kids moving, we challenged them to find the next one.

Although there is an incline, the path starts fairly smooth and wide, but as you get higher up, the climb becomes more challenging with rough ground and the occasional boulder underfoot.

It was an unexpectedly hot day on our visit and we took plenty of rest stops as we climbed, but it’s a great excuse to admire the views as they started coming into view.

Everytime you think you are near the top, you’re not as another peak comes into view, however the reward for the climb is the magnificent views of the Mendips and beyond.

To the south you can see the flat, lush water meadows of the Somerset Levels, and the Cheddar Reservoir and to the north you’ll see the windswept plateau that runs for over 22 miles east to west!

You can also see Glastonbury Tor from some viewpoints.

We only managed to explore one side of the gorge, but we hope to go back in October half term to do the other.

I thought the walk back down might be a bit easier, but because the ground is so uneven, you need to choose your footing carefully.

It was then back down Jacob’s Ladder to find the museum.

We were all relieved to be back in the gorge as it is a free degrees cooler down there and were soon exploring some of the quaint gift shops and enjoying an ice cream.

The Museum of Prehistory is in a small building opposite the cave entrance and tells the story of how our ancestors lived through a 40,000 year struggle for survival during the last Ice Age.

There is lots of information about the world-famous Cheddar Man, the oldest complete human skeleton ever found in Britain, as well as examples of some of the discoveries found in the caves, such as flint tools and objects.

It doesn’t take long to explore the museum, but it is packed full of fun facts and information and the kids took it all in.

Because it is indoors, adults and children over 12 must wear face masks.

We really enjoyed our visit to Cheddar Gorge and will definitely return once the caves are open. Lets hope it is sooner rather than later!

Have you visited Cheddar Gorge before?