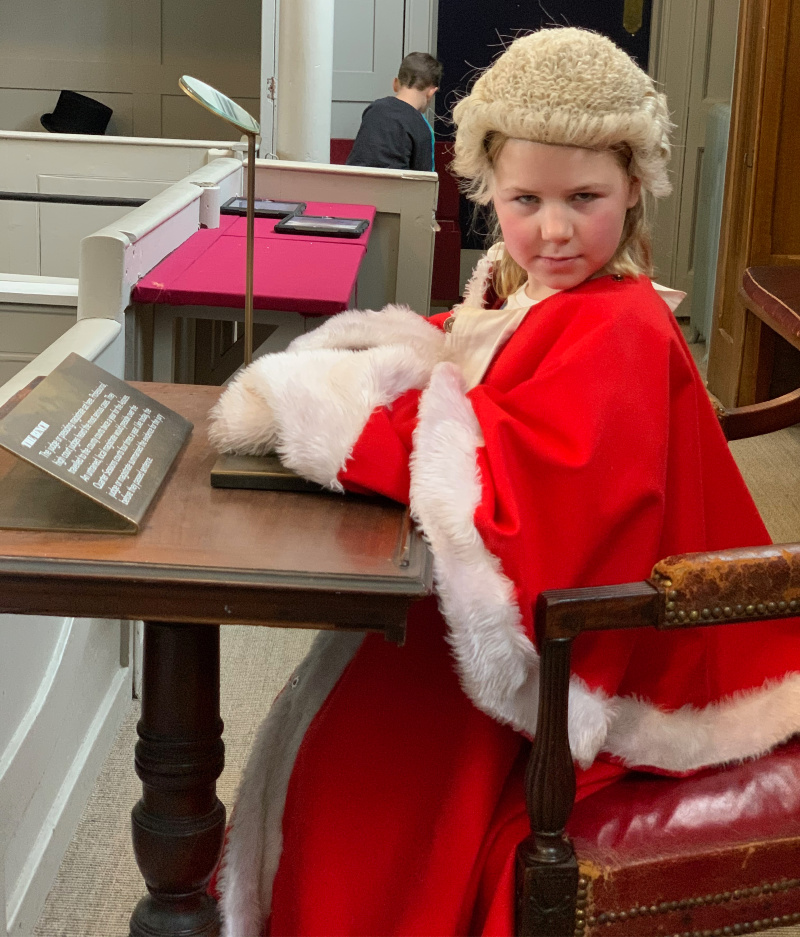 Taking the kids to an old courthouse, probably isn’t the first day out that springs to mind when looking for things to do, however, it is well worth considering if you are visiting Dorset.

The Shire Hall Historic Courthouse Museum in Dorchester is an interactive museum that uses real-life stories and iPad guides for children, to let you walk in the footsteps of the people who were on held and sentenced in the courthouse, including the infamous Tolpuddle Martyrs.

Shire Hall was Dorset’s courthouse from 1797 until 1955 and the first thing that strikes you is the beauty of the building, which is Grade I listed.

You enter the building through a gift shop and reception area, filled with fabulous local goodies to buy. The entrance to the museum itself is at the rear of the shop, where you collect your iPads or audio guides.

The real selling point of the visit, is just how much it engages the children.

Initially, it was just Sebby and Eliza who wanted the iPads, however, at the age of 6, Sebby struggled to do some of the challenges, so Isaac stepped in and they worked together on solving the clues.

You start by learning about some of the families that live and work in Dorset, finding out what jobs they would have and how much money they would earn and the difficulties they face.

Next door, there is a small area to watch a film, before heading in to see the holding cells and completing more quizzes and challenges.

The kids loved hunting for the memory boxes and finding out the answers to the questions.

Plus there was also places to dress up like some of the men, women and children that would have been held in the cells, awaiting trial.

The kids were shocked to learn that children as young as them could have been put on trial for misdemeanors as minor as stealing trousers from a washing line.

There was a whole section dedicated to the Tolpuddle Martyrs, who’s crime was to have formed the first ever trade union to protest about their meagre pay of six shillings a week.

The real “WOW” moment of the visit, has to be the court room and what really made it special was that the kids could dress up.

They all enjoyed getting into various characters as they posed for pictures around the court room.

It was here the iPads really got interesting as they became reporters on a trial and had to work out who they thought was guilty or not guilty of the crime of stealing trousers. They even got their article printed at the end of our visit.

If you are looking for something to entertain the kids over Easter, they are hosting their Easter Holiday fun event from 6th-22nd April where you can hop on down to Shire Hall to Count Your Chickens in their trail and let the kids creativity spring into action by decorating Easter egg biscuits.

A family ticket to Shire Hall costs £20 and includes an annual pass giving you free entry for a whole year!

Disclaimer: We were guest of Shire Hall for the purpose of a review. All thoughts and opinions are our own