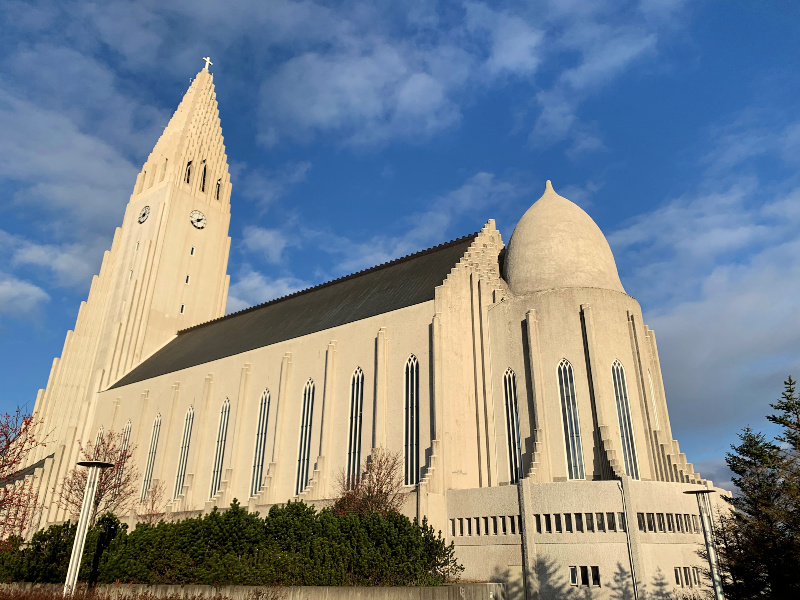 I often see the vibrant red buses of City Sightseeing in our own home town of Bournemouth, but until now we have never been on one.

On our first full day in Reykjavik, Iceland, we decided to hop on one their local bus for a tour of the beautiful city.

The Reykjavik City Sightseeing Tour starts at the Harpa Concert Hall, situated next to the Old Harbour and is just a 10 minute walk from where we stayed, so we took advantage of the good weather and wandered along the harbour front, drinking in all the fantastic views.

We all thought that the sculpture represented a Viking boat, however, it is a dream boat and an ode to the sun, with a promise of undiscovered territory, a dream of hope, progress and freedom and the perfect spot for a selfie!

As we headed along the shoreline, we noticed that there were many man made pillars of stones that have been built by tourists and the kids were eager to add their own creations.

The City Sightseeing Tour runs every hour, so we had a little time to wait and explore the area outside the Harpa Concert Hall, which is a huge building made of geometric coloured glass.

The kids were more excited by the steaming pools of geothermal water outside the building though!

The City Sightseeing Tour allows you to explore the city at your leisure, with the opportunity to hop on and off at conveniently located bus stops.

The kids insisted that we sit on the top deck so we could enjoy the panoramic views of the city from up high, although the open top element was closed and the heaters on full blast as it was a chilly 0ºC outside.

We were provided with a set of headphones each so we could listen to the audio guide commentary to discover the history of Reykjavik and the landmarks as we went past.

There are 16 stops on the tour and we decided to do a full loop before deciding where we wanted to get off and explore.

Much of the city is undergoing regeneration, so there is a lot of building work going on, but one thing that struck us was the amount of stunning street art there is to see.

There are several large and elaborate murals adorning the walls of buildings in and around Reykjavík’s centre, some of which we saw from the bus and others as we wandered along after getting off the bus.

Our first stop was Hallgrímskirkja church, Reykjavík’s main landmark with a tower that can be seen from almost everywhere in the city, including our apartment.

The church has a very striking look and we subsequently discovered that the pillars were inspired by the fascinating shapes and forms created when lava cools into basalt rock.

The church is beautiful, both inside and out and I would highly recommend paying the small fee to climb its impressive tower – a lift takes you the majority of the way, so don’t worry about little legs not making it.

The views are quite simply spectacular, plus you get treated to the bells ringing every 15 minutes.

As you come out of the church, follow the road directly opposite the entrance, past the statue. After a few minutes walk, you find a beautiful rainbow road.

This road leads to the main shopping street called Laugavegur, renowned for its boutiques, restaurants, and bars, although I did find my very own street en route.

The City Sightseeing Tour also points out all the local museums, which includes the stunning Reykjavik City Museum which has a high-tech, interactive multi-media experience, a whale museum, viking museum and Northern Lights museum.

The tour also pointed out the famous Baejarins Beztu Pylsur, where we just had to stop to try one of their famous hotdogs.

They were absolutely delicious and probably the cheapest meal we had all week too!!

Doing the City Sightseeing Tour definitely pointed out some interesting buildings, family friendly restaurants and features that we wouldn’t have noticed otherwise, but, as Reykjavik is a small city, much of it is accessible on foot, if you don’t mind walking.

The City Sightseeing Tour costs £25.39 per person, with children under the age of 11 FREE.

Have you done a City Sightseeing Tour before?