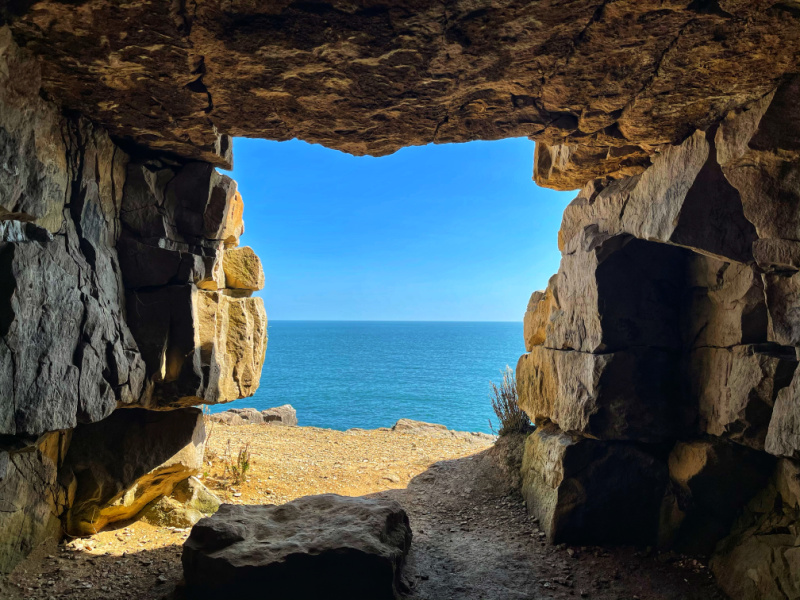 Jurassic Coast Walks: Exploring the caves at Winspit and on to St Aldhelm’s Head

Last week we discovered the Dinosaur footprints near Swanage and on our walk to the southwest coast path, we spied some caves that we knew the kids would love to explore.

Winspit is an old disused quarry on the coastal cliffs near Worth Matravers, which provided building materials for many of the major buildings in London and later became a World War Two naval and air base.

The closest place to park is Worth Matravers village carpark (BH19 3LE), which comes complete with its own compliment to stonehenge – wood henge. From there walk down into the village, past the Square and Compass pub, bearing right down the hill and then joining the path to the coast.

The walk is around 15 minutes to the quarry down through hills and farmland.

If walking with young children it is worth bearing in mind that the cliff edges are not fenced off, so you need to keep a close eye on them.

Most of the caves are accessible to the general public, however it is clearly signposted that you do this at your own risk.

The caves are fascinating and full of nooks and cranny’s that you just have to explore.

The kids adored climbing on the ledges both inside and outside the caves.

As well as the caves, there are plenty of other areas to explore.

There are holes to climb in, towers to jump off and shaded areas to relax.

As Dr Who fans, we were also excited to find out that the 1979 episode, Destiny of the Daleks was filmed here.

From the caves we walked up and over the top of them along the southwest coast path towards St Aldhelm’s Head.

Make sure the kids are sensible and walk on your right hand side as some of the path is scarily close to a sheer drop over the cliff.

St Aldhelm’s Head is the most southerly tip of the Purbeck Hills and features a gorgeous monument on top.

The monument commemorates the importance of the peninsula in the wartime development of radar. It consists of two radar dishes cunningly arranged to symbolise a large fire basket, linking the modern warning systems with the fire beacons used to warn of the approaching Armada in 1588.

Also on the head is St Aldhelm’s Chapel which is is unusually aligned, with its corners – and not its walls – facing the four compass points.

From here, we turned back inland and headed back towards Worth Matravers.

Once back at the village, there are lots of places to sit, relax and take in the atmosphere.

We cannot wait to head back and visit the small museum that is attached to the pub when it all reopens.

Have you visited Winspit before?