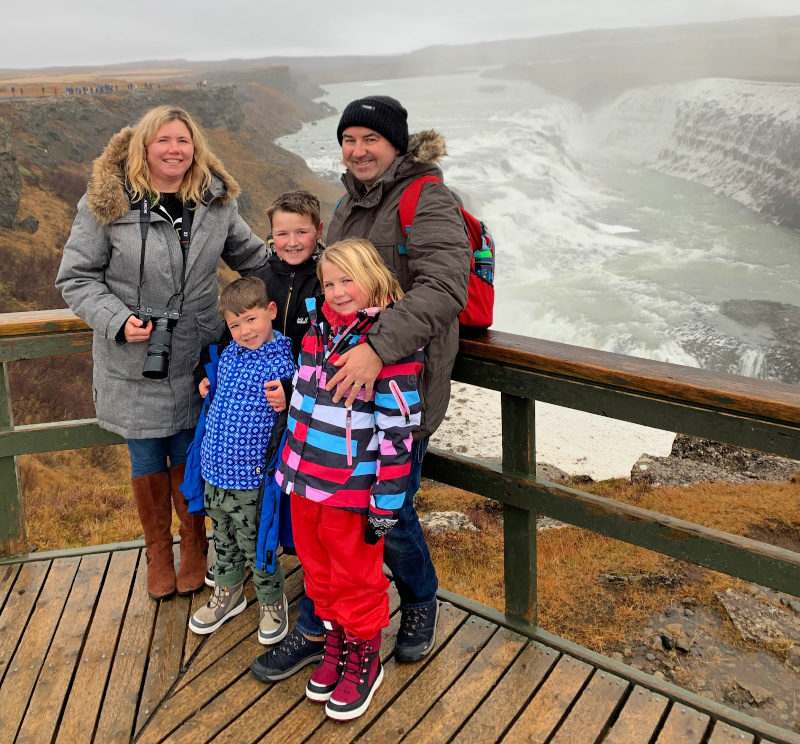 The Golden Circle is Icelands most popular destination and consists of Þingvellir (Thingvellir) National Park, the powerful Gullfoss waterfall and the explosive geysir geothermal area.

Gullfoss (Golden Falls) is one of the most famous waterfalls in Iceland.

There is a large visitor centre which apparently serves the most amazing lamb stew, but as we only had an hour to explore, we headed down the path to see the waterfall in all its glory and it is a real “WOW” moment when it comes into view.

Located in the canyon of the Hvítá river, the waterfall cascades 32 meters down in two stages.

There are two viewing platforms, one which means negotiating a huge metal staircase, which brings you out by the lower, larger waterfall and the other which is a flat walk to the first waterfall drop.

It is worth spending time at both!

The first, shorter cascade is 11 metres, whilst the second drop is 21 metres, meaning that the waterfall does throw a huge spray into the surrounding area, so take your waterproofs!

I was surprised to learn that the waterfall is actually stronger in the summer because its water is fed directly from the Langjökull glacier, but whatever time of year you visit, you just want to stand and watch it, even in the rain!

We also learned some of the history around the waterfall and how an English businessman wanted to turn it into a hydro-electric plant in the early 20th century. Thankfully he was stopped thanks to a very determined environmentalist called Sigríður, whose plaque is displayed close to the waterfall.

It is a fascinating and beautiful place to visit and as I mentioned in my previous post, if you do intend to book a Golden Circle Tour, I would recommend asking how long you will spend in each location as an hour was not long enough and I would have liked to visit the visitor centre and cafe.