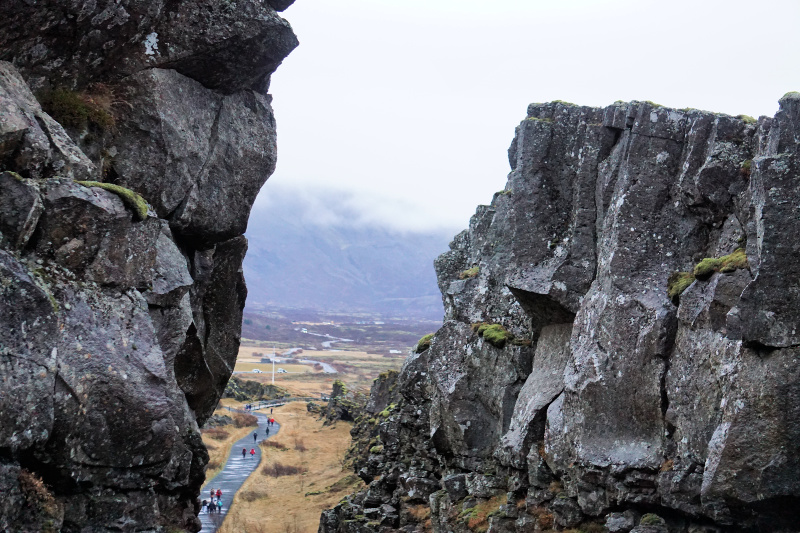 The Golden Circle is Icelands most popular destination and consists of Þingvellir (Thingvellir) National Park, the powerful Gullfoss waterfall and the explosive geysir geothermal area.

We booked our Golden Circle Tour with Grayline and set off to explore on the rainiest day of our visit to Iceland and it took just under an hour to get to our first destination, Þingvellir (Thingvellir) National Park.

Þingvellir National Park is probably the place I wanted to visit most on our holiday to Iceland as it is located in a rift valley where the Eurasian and North American tectonic plates meet.

I wasn’t aware that the area was also of great historical and cultural significance, but our tour guide told us that it is also the birthplace of the Althing, Iceland’s parliament that was founded in 930 AD. It was here that the nation’s most powerful leaders would meet to decide on legislation and carry out brutal Viking-age justice.

We took our South Coast Tour of Iceland with Reykjavik Sightseeing and I have to admit that our Grayline Tour was nowhere near as good, mainly because it was obvious from the very start that there was a very strict timetable to stick to. When we arrived at Þingvellir, we were given just 40 minutes to explore.

You can see the fault lines from the coach as you head into the national park and we were dropped off at the Visitor Centre, which is based at the Hakid viewpoint.

We then headed down the footpath which leads down into the great Almannagjá fault, which marks the boundary of the Mid-Atlantic Rift, which runs through Iceland.

This rift is the space between the North American and Eurasian tectonic plates which are continuously pulling away from each other at a rate of around 2.5cm per year.

The ground at the lower level, to the right is the Eurasian plate, whereas the higher ground to the left is the North American plate.

We were lucky enough to arrive fairly early, so got to explore unhindered and enjoy the views, before it was time to leave.

Be warned that it does get very busy, as we found when it was time to head back to the coach.

Þingvellir National Park is definitely somewhere we would spent at least a couple of days exploring normally and there are hotels and campsites nearby if you wanted to explore the hiking trails.

If you do intend to book a Golden Circle Tour, I would recommend asking how long you will spend in each location, as we would have liked at least 90 minutes here as we didn’t even get a chance to go into the visitor centre.