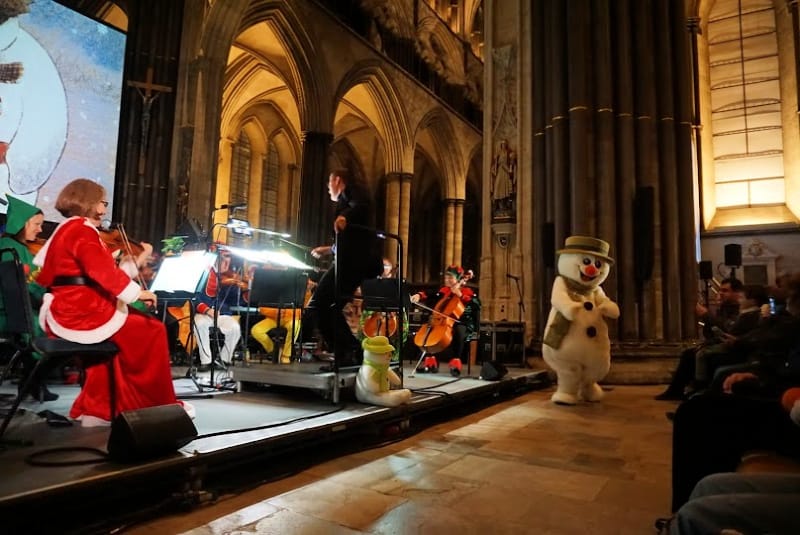 When The Snowman Live Music Tour came to Salisbury Cathedral

I found out yesterday that The Snowman first came out in 1982 – making me 8 years old when I first saw it.

Watching The Snowman has become a Christmas tradition in our house and whilst it doesn’t use CGI or modern animations, its quirky animation and heart warming story still captures the kids imaginations.

When I discovered the film was heading to Salisbury Cathedral, accompanied by a live orchestra I knew this would be an extra special performance.

We headed to Salisbury last night and found the city sparkling in Christmas lights.

I knew that The Snowman experience offers more than a viewing of the beloved movie, but even I was surprised by the content of the show.

Before the performance started, the kids entertained themselves by admiring the costumes that the orchestra were wearing. How some of them played their instruments I don’t know, as we spotted a carrot, a cracker, a slice of cheese and even a Christmas Tree as well as elves and Santa costumes.

The performance started with some traditional Christmas songs played before a large screen, before moving on to a funny poem where we met the orchestra and the instruments they played.

It was then on to a performance of the story of the Bear and the Piano, also accompanied by the professional orchestra. Sebastian was particularly excited by this as he has been reading the story at school and excitedly narrated it for me as we watched.

Of course, the highlight of the evening was the performance of The Snowman itself, which was introduced by The Snowman himself, much to the delight of the younger members of the audience.

Eliza’s jaw dropped as a young soloist from Salisbury Cathedral Choir performed the famous Walking in the Air song live.

The whole performance lasted just over an hour and is the perfect introduction to live music for children. My three, aged 6, 8 and 11 sat transfixed throughout the whole thing.

Visit www.carrotproductions.com/the-snowman/ to get a sense of what a performance of The Snowman is like and for a full list their tour venues and dates. Sadly Salisbury is now sold out, but if you are fairly local, the performance will be in Winchester next weekend (14th December).

Salisbury Cathedral is a beautiful venue too and we will definitely be back to explore in the daylight as it is set in the largest Cathedral Close in Britain, has Britain’s tallest spire and the best preserved Magna Carta in the UK!

Have you seen a live production of The Snowman?

Disclaimer: We were gifted tickets for a review of the experience. All thoughts and opinions are our own