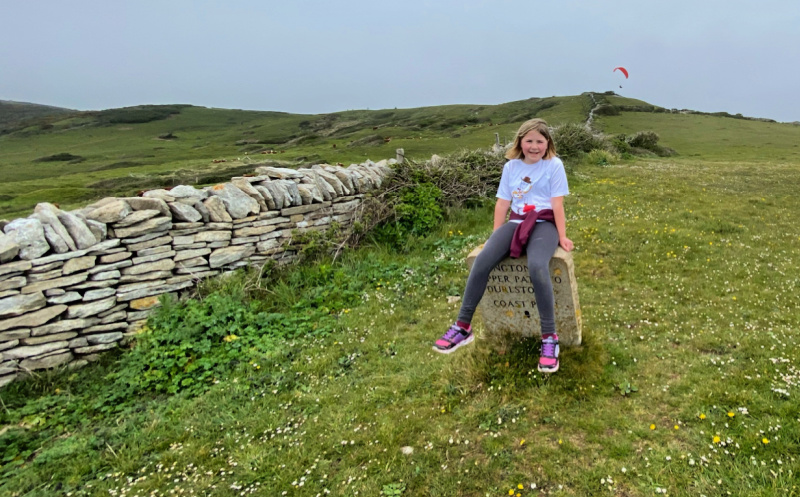 Of course, the pandemic has caused the challenge to completely stall, however, there is one entry on there that we can achieve, even during a lockdown – walking the Jurassic Coast.

Living in Dorset, near the start of the Jurassic coast, we already have some favourite spots, including Old Harry Rocks, Winspit Caves and Worbarrow Bay, but we are keen to find more.

Walking from Durlston Country Park to Dancing Ledge with kids

We have visited Dancing Ledge recently, but parked at Spyway car park which is closer, however, we wanted to do a slightly longer walk, so decided to start at Durlston Country Park in Swanage.

Durlston Country Park is a beautiful clifftop nature reserve with a visitor centre and gallery in a renovated Victorian castle and home to the Great Globe, one of the largest stone sphere’s in the world.

The walk takes you along the clifftop, past the Tilly Whim caves and Anvil Point lighthouse. We hoped to spot some nesting puffins during our walk, but sadly we didn’t see them. We did find the Guillemot’s nesting on the cliff though.

If you want to walk to the lighthouse with young children, it is hilly in places but is pushchair friendly, however if you wish to continue further, you will need a back carrier as there are steep hills, steps and sheer, unprotected drops in places.

The walk then follows the coast path to Dancing Ledge, offering spectacular views over the countryside to one side and the sea to the other.

The coast path can be quite demanding in places and there are a couple of large hills to negotiate.

Once you reach Dancing Ledge, you need to climb over the style and walk down the uneven steps.

Here you have a large flat area to explore and settle down for a picnic, but it is another tricky climb down if you want to get down close to the ledge.

Dancing Ledge is a flat area of rock at the base of a small cliff and gets its name because, at certain stages of the tide when the waves wash over the horizontal surface, the surface undulations cause the water to bob about making the ledge appear to dance.

If you want to get to the pool itself, you will need to go a low tide and don’t jump down, as it is covered in seaweed and very slippery – the easiest point is to the east of the ledge.

Apparently puffins nest to the west of Dancing Ledge in April to early May, but we didn’t see them, so we walked to the next bay along, Henbury to see if we could spot them.

Sadly it was a no, but we did find a rusty canon and some caves to explore.

You can walk back to Durlston Country Park on an inland route, but we decided to walk back along the coastal path, the way we came.

The kids were very relieved when the lighthouse came back into view.

Have you got a favourite walk along the Jurassic Coast?